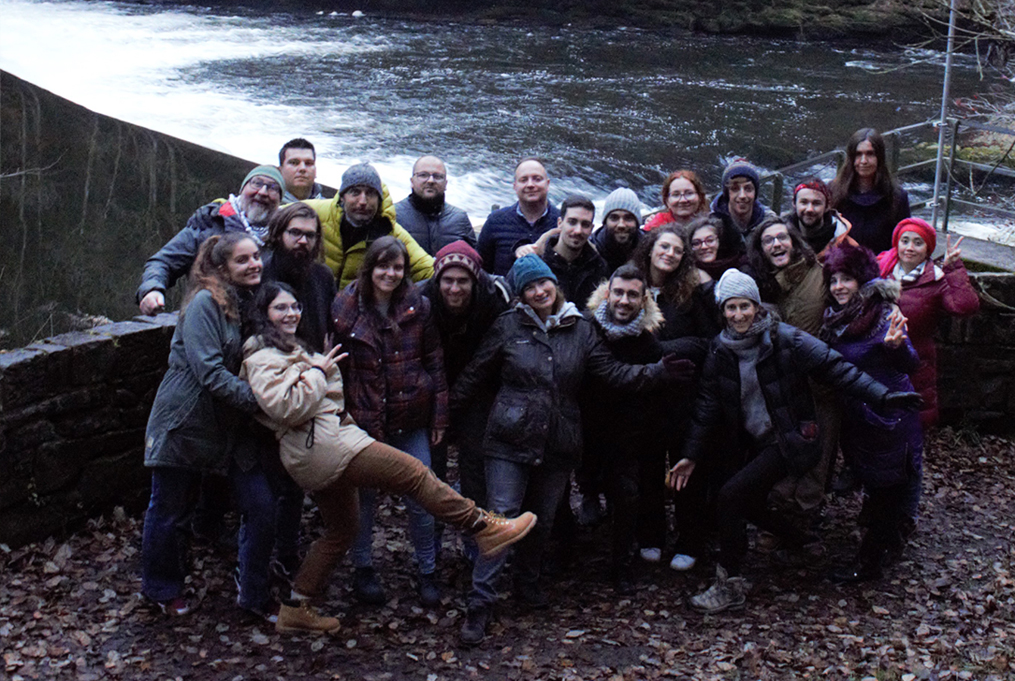 I’m at home, it’s 8.40 pm. "Mum, come on!"Anxiety, excitement, fear, joy: it's time to leave. When I applied for the Erasmus + project in Scotland, I never thought it would become one of the best experiences of my life. I leave the house, I smile, take a deep breath and .. PLOOM! "We inform you that your coach is half an hour late." It’s okay, don't panic, we'll be able to catch the flight. Eleven hours later Miriam and I were at the airportin a bundle of nerves and running to check our baggage. PLOOM! "(Also) your flight will be an hour late", another deep breath. We made it.

After an endless journey and after being saved by two Spanish boys, we arrived in the hostel of the small but beautiful village of New Lanark, frozen and surrounded by nature. No wonder it is a UNESCO heritage site. To welcome us Buzz Bury, one of the trainers of the project The Importance of Play,who told us, with a fantastic and at that moment incomprehensible Scottish accent: "You did it, you arrived in New Lanark. Consider it as an upside-down escape room: you must try to stay”. It’s going to be fun, I thought. Once toasty,Breigen Brown and Will Stringer introduced themselves as two other trainers of the project. The first thing I noticed? It was the first day for almost everyone and people were already talking or playing board games, laughing and joking as if they had always known each other, and that’s exactly the kind of atmosphereyou should be surrounded by on occasions like this.

After leaving our suitcases, we gathered in the first of the many circles that followed to start with the activities. I think that what struck me the most was the fact that my expectation on the training course was completely twisted: I was convinced that it would be a theoretical course and that I would return with two notebooks full of words related to the game; instead, we literally played all the time. What more could I ask for? Right from the start, the activities allowed us to become familiar with all the participants, to get to know each other better and maybe find someone who was like-minded us. In addition, the WiFi connection was practically non-existent, but you know what? Better this way. We can all say that we have been there, physically and mentally. Perhaps this is also why we all experienced emotions in an amplifieddeepway, to the fullest. Throughout the week, each of us felt carefree, happy, free from judgments, curious, adventurous,creative. We learnt to respect times, spaces and limits of other 22 people, which in an extended family of six like mine is often very difficult, but not there. We managed it perfectly. We learnt ofnew cultures, other ways of expressing ourselves and maybe we discovered that we have a flair forsomething that we really didn't expect. We could establishthat making new friends is not as difficult as we think, because all the social barriers were destroyed within a few hours as we were forced to relate, without the “yeah, I’ll text him/her later”option. On the subject… I think I’ve never cried so much for the sadness of having to leave someone I knew for so little time. We all connected so much, I met wonderful people who were always happy and ready to go through the experience fully. I opened up and put myself to the test as a person and I don't regret it, not even a little bit – even missing the right train stop to say goodbye. In the end,nothingactually went wrong,even in terms of food - and that’s saying a lot since I'm Italian - but chef Brett gave his best to make us feel at home, like a big family

In conclusion, what I feel like telling youis that if you ever have the opportunity to take part in a project like this, do it with your eyes closed and experience it to the fullest. You will not regret it.

P.S. If you have the chance, try the Scottish ice cream. It's absolutely crazy! Or maybe it was just Brett’s magical touch!

Previous articleTravel and change the world!
Next articleThe importance of learning foreign languages