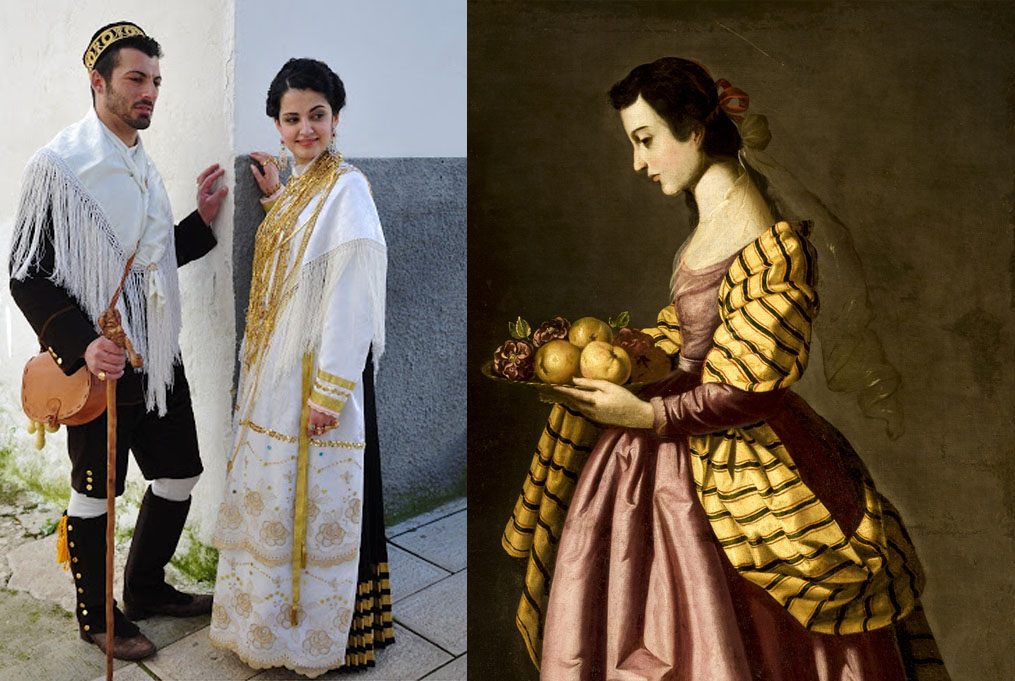 BETWEEN HISTORY AND TRADITION

When you think of Apulia, you think about food, amazing landscapes, entertainment and many museums and art. And that’s it!

However, this great and large region, in Southern Italy, well-known and loved for its beautiful sea where you can spend the summer holidays, has a lot of history, and today we are going to talk about the history of “Traditional Apulian clothes”.

During festivals or specific events, the inhabitants of a given country used to wear these traditional clothes to make the event or festival fascinating. In the past the dress most worn by women was made of a wide skirt, usually red and very beautiful, with a white apron on top. Above the skirt, usually, there was a white shawl adorned with jewels.

One of the dresses that is still worn in Castro for the procession in honor of “Santa Dorotea” (St. Dorothy) is actually her dress.

The history of “Santa Dorothy” is very fascinating. In “Cappadocia”, the ancient region of Asia Minor, stood the city of Cesarea, called so in honor of the emperor Tiberius, in the year 300 of the IV century (from 300 to 400). In this city lived Dorothy, a Christian girl who always worshipped God. At that time, in the city of Cesarea, there was a persecutor of Christians, Saprizius, who knew that Dorothy was a follower of Jesus Christ. After summoning the girl, Saprizius asked her to make sacrifices to the Gods, but Dorothy was very determined not to abandon her creed.

After being released, Dorothy met the judge Theophilus, who was present when Dorothy told Saprizius that her husband was in Heaven and how the gardens were full of flowers and fruits up there.

Before being beheaded, she prayed, and when the prayer was over, an angel arrived in the form of a child and brought Theophilus the apples and roses he had asked for. When the angel disappeared and Dorothy was beheaded, Theophilus converted to the Christian faith.

Theophilus was sentenced to death by decapitation for having converted to the faith of Christ. The liturgical commemoration is celebrated on 6 February. She is the patron saint of florists and of the city of Pescia, in Tuscany. She is also a compatron of the Salento municipality of Castro, and she is represented holding a basket of fruit and flowers.

Another traditional woman’s costume is that of the “Pacchiana”, the peasant, used until the late 1800s: this dress was worn during special occasions. It was also worn in the second postwar period, but only during carnival and festivals. For men there was the traditional “shepherd’s dress”, which was composed of a jacket and velvet pants buttoned under the knee, a top hat of black velvet embroidered with nappa and a handkerchief on the shoulders.

Previous articleTime is the best author: it always finds a perfect ending.
Next articleJoe Biden