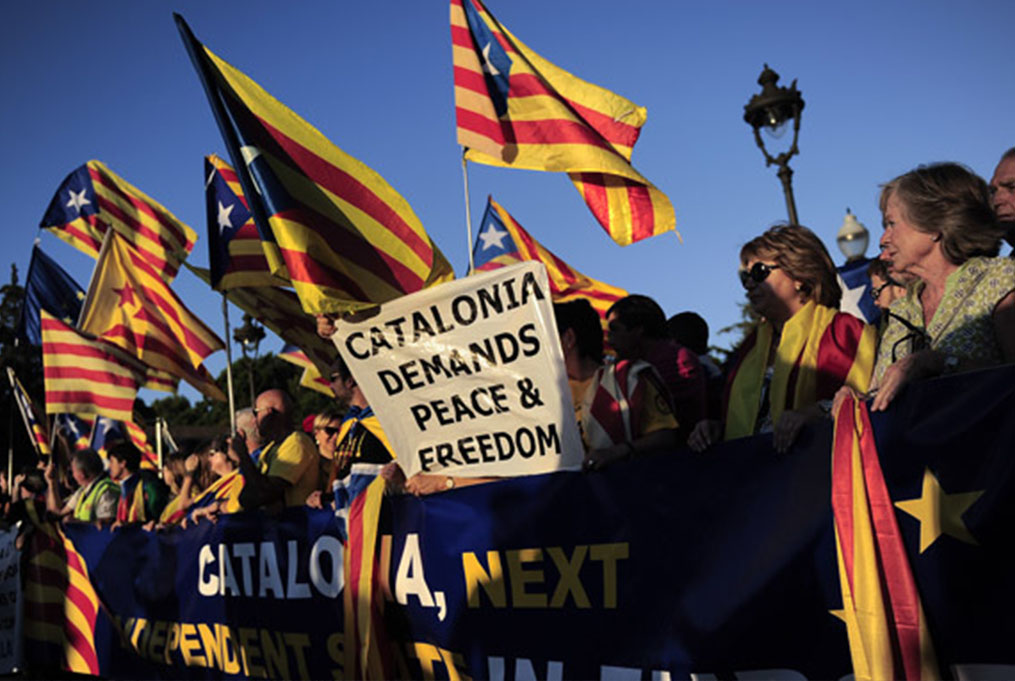 All the way through Catalan Independence

How did Catalonia develop the desire of Independence through the years? Let’s analyse several events that lead to the current Catalan situation.

GENERAL CONDITION- We have to remember that Spain is an Autonomic State and on an administrative level, Catalonia is an Autonomous Community with Barcelona as its capital. The desire of Independence is remarkable since Catalonia is considered the richest region in the nation, with 7.5 million citizens, which is equal to 16% of Spanish population. In this region, the unemployment rate is 10.6% instead of 13.9% in the entire nation. Thanks to Barcelona that attracts millions of tourists and European students, the tourism rate of the region increases every year.

POLITICAL ISSUES THROUGH THE YEARS - As an autonomy, Catalonia has its own Parliament which is called “Generalitat”. On September 27, 2015 (in that period Artur Mas was the Generalitat President) we could see the presence of some autonomic elections in Catalonia. In accordance with these elections, a new Independentist political group was rising, it was called “Junts pel sì” (literally “Together for yes” in Catalan).

On November 9, 2015 in Generalitat there was an investiture debate to re-elect Artur Mas as a president. Thanks to 27 Independentist Members’ votes, the purpose was reached and this event marked the beginning of Catalan Independence Process. As soon as this happened, Mariano Rajoy (Spanish President of Government) decided to send an instance to the Constitutional Courthouse, and the Generalitat request was kept in suspense.

Artur Mas’ investiture resulted unsuccessful, and as a consequence Carles Puigdemont was elected as his substitute and became the new Generalitat president. During his investiture speech he decided to withdraw the engagement of making Catalonia Independent in just a year and a half.

After only a few months, Puigdemont changed his plan and proposed a new referendum in which Catalan population would self-declare Catalonia as an Independent Republican State.

On October 1, 2017 the referendum took place illegally, in fact during the first few hours civil guards and national police (Mossos d’Esquadra) decided to try blocking the vote in electoral offices. Five days after, the Generalitat sabotaged the results, due to the fact that votes weren’t checked by any administrative organs: as a result, 43% voted “Yes” for the Independence.

On October 10, Carles Puigdemont announced that Catalonia was an Independent Republican State.

In that exact moment, the Spanish Parliament wanted to apply the 155th Article of the Spanish Constitution, through which Catalan autonomy could be suspended. On October 27, Carles Puigdemont scheduled plenary sittings in the Generalitat to announce the independence; he was afraid of a likely suspension in case of the application of the 155th Article.

Immediately Mariano Rajoy applied the 155th Article, and Catalan autonomy was suspended. Carles Puigdemont decided to exile himself in Bruxelles so as not to be imprisoned. In fact, on December 21 there was an election where Quim Torra was proclaimed Catalonia President.

Nowadays, all of political leaders who were in favour of that illegal referendum were processed by the Supreme Courthouse; the sentence was released the 14th October 2019 in which the defendants were sentenced from 9 to 13 years of imprisonment for sedition.

STORICAL AND CULTURAL HERITAGE – Catalonia has a strong cultural identity, due to the presence of their own language and customs. Catalan, that once was forbidden during the period of the fascism of Francisco Franco, is now an official language alongside Spanish. This region also has a high level of autonomy due to the development of several fields: from the industry to engineering, from tourism to services. Another important factor is the presence of their own police force, called Mossos d’Esquadra (literally “Hubs of team”).

CATALONIA TODAY – The desire of Independence is still noticeable. Waiting for the independence so much hoped for, every inhabitant will continue to work hard to keep the name of Catalonia high.