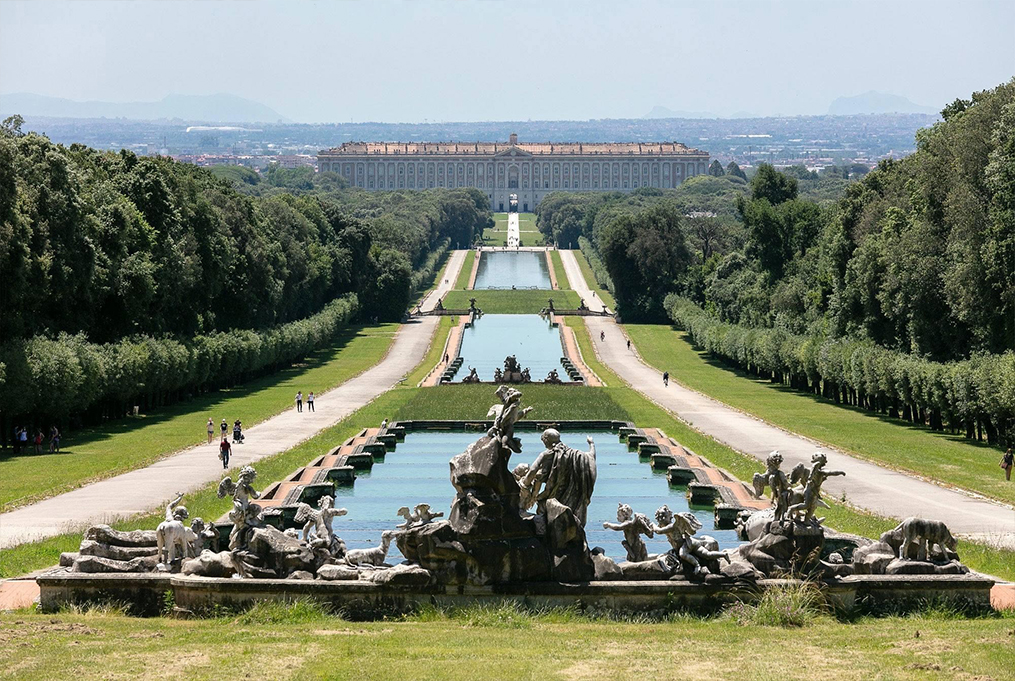 The Royal Palace of Caserta

The Royal Palace of Caserta is considered the largest royal residence in the world because of its volume. It’s the only palace that rivals Versailles. This impressive architectural complex has been declared a World Heritage Site by UNESCO. The Royal Palace located in Caserta, Campania, consists of the historic palace and the huge park, which together occupy about 1,000 m³.

The King of Naples Charles of Bourbon was in competition with the French kings and decided to build a palace that could exceed that of Versailles. So he commissioned Luigi Vanvitelli, who at the time was already engaged in other constructions. However he accepted the assignment commissioned by the King of Naples with honor, and in 1751 he presented the entire project to the King. The design consisted of the construction of the solemn royal palace with the adjoining majestic park with the famous Carolino Aqueduct. The following year work began and Vanvitelli worked with numerous collaborators including Francesco Collecini. The work ended in 1845 and the cost was 8,711,000 ducats.

The palace of the royal residence has 1200 rooms and 1742 windows. The main facade consists of a central forepart surmounted by a pediment, on the sides there are two other foreparts and the south side is decorated with twelve columns. The interior boasts numerous frescoes, stuccos, bas-reliefs, stairs, statues and decorations in the Baroque style. The three main rooms are the Throne Room, the Hall of Mars and the Hall of Astrea. There is also the magnificent royal staircase with two flights and 117 steps and two very famous statues depicting two majestic marble lions.

The Royal Park covers a length of three kilometres over 120 hectares. From the main facade of the palace there are two long avenues, where there are numerous statues, plants, trees, basins and fountains. The main fountains are the Margherita Fountain, the Fountain of Aeolus, the Fountain of Venus and Adonis, the Fountain of Ceres, the Fountain of Dolphins and the Fountain of Diana and Actaeon with the Grand Cascade. Enriching the immense park are the large gardens, the Italian Garden that was intended for exercises for naval battles of the young Ferdinand IV, and the English Garden with rare plants, ponds and small buildings.