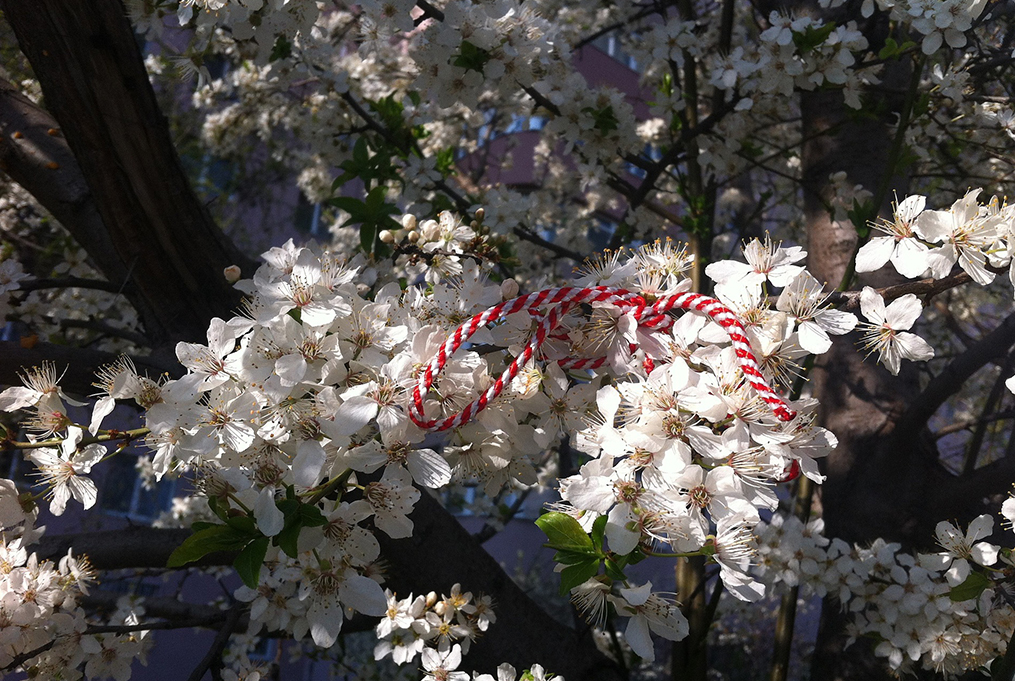 Mărțișor (mər͡tsiˈʃor) is an ancient Romanian tradition to welcome spring and new beginnings. Even though in some areas Daco-Romanian people still celebrate the agrarian New Year in spring and consider the first days of March a new beginning, the origins of this custom are still unclear. Some believe it has Roman origins, while others say it has Daco-Thracian origins. This festivity is also celebrated in Moldova, Bulgaria, North Macedonia and Greece.

Mărțișor is a diminutive of the Romanian word Marti, that means march. Thus, Mărțișor means “little march” or “dear march” and it’s one of the names given to the custom of giving a red and white string with a silver hanging tassel on the 1st day of March. The colours are very important and there are various versions of this ancient talisman in different colours. Each colour combination has its own meaning. In Daco-Romanian folklore each season has a representative colour: winter is white, spring is red, summer is yellow or green and autumn is black. Therefore, the Romanian version with white and red strings knitted together is a symbol of passing from the cold and harsh winter to the warm spring. Though the two colours can also symbolize the cohesion of evil and good energies. The strings of the Romanian Mărțișor must be white and red, but the talisman can be pretty much anything, from a bracelet to a necklace or a pin.

The most common belief says that the wearer of Mărțișor will be strong and healthy throughout the year. Usually both men and women wear this talisman pinned to their clothes and close to the heart until the last days of March, when they tie it to a fruit-tree. But since this is an ancient custom, many places developed their own version of Mărțișor, with different colours and slightly different beliefs.

One of my friends this year made me take part in this marvellous tradition, she is from a Romanian town called Miceşti. In their area the Mărțișor tradition is a little bit different from the common one I described before. They give Mărțișor bracelets to people they love, relatives and friends. The ones who receive the little talisman should choose a day in between the 1st and the 9th of March and based on how that day goes, the same will happen with their year. When the 9th of March comes the talisman should be tied on a flower and it is said that the person who tied it will become as beautiful as that flower.

Nowadays Mărțișor is still a very widespread custom in Romania, but especially in urban areas the little charm is no longer seen as a talisman, but more as a symbol of love, friendship and respect.

Previous articleEspérame en la última página – A love (not quite) like in the books
Next articleHarry and Meghan: the other side of the Crown